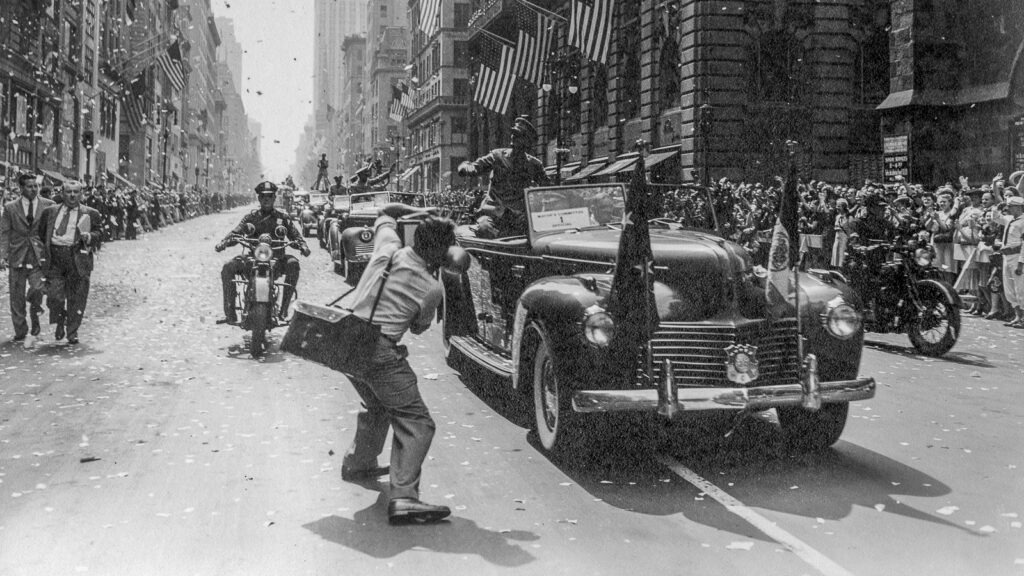 After arriving in London, Hugo Wilmar joins the Navy information service. He will be educated in America with the United States Marines. He is given an American uniform and a Tommy-Gun. The War volunteer embarked on December 20, 1944 aboard the USS Wakefield. During the crossing to America he has to guard German prisoners of war. After all the hardships that Hugo had to endure during his escape from occupation, he is annoyed at how well the Americans treat German prisoners.

On December 30, the Statue of Liberty and New York skyline looming on the horizon. New York is just one stop on the way to Camp Lejeune In North Carolina. Here Hugo starts his officer training, under the auspices of the Americans.

It only takes a few days before all spectacle wearers from the program are assigned other tasks. To his anger, he is demoted to kitchen service. Strengthened by the experience during his escape from Europe to take matters into his own hands, Hugo, as the first Dutchman in history, manages to secure a place in the training of war photographer at the prestigious Signal Corps.

In February 1945, while awaiting his education, Hugo works on the Dutch translations of American training films, acting in small roles and recording voice-overs. During his leave, Hugo travels through America. Hugo discovers the limitless possibilities that America has to offer.

(…) Jan, America is, in a word, shit-so-shitty guys that I'll go back later and I've often thought about why you never came. ”

Meanwhile, the war in Europe is drawing to a close. During the  bombing of Bezuidenhout on March 3, 1945, Wilmar's parental home is hit. Hugo's family's miracle remains unharmed.

In May 1945, the nature lover and amateur photographer returns to New York. Now that the Netherlands is liberated, he can finally write down his journey in scents and colors in a long letter to his parents. In New York, his training begins at the Signal Corps Photographic Center, the renowned institute of the United States Army

Hugo learns to photograph people with a Leica camera. Hugo prefers to photograph landscapes and sunsets, but his superiors are not interested in that. Instead, he has to make reports of returning war heroes, and take unnoticed photos of unsuspecting passers-by. When these people look into the lens, his mission has failed. During his training he captures iconic events on big screen - the tickertape parade of General Wainwright, the hero of Bataan. Hugo's photos, together with the film reports of these events, form a beautiful picture of the time.