In February 1944 Hugo Wilmar leaves as Engelandvaarder to London, to register as a war volunteer there.

The story goes that Hugo Wilmar was picked up by the German occupiers in late 1943. When he is arrested he pretends to be mentally handicapped. The German doctors examine him for two months at the Ursula clinic in Wassenaar. A befriended doctor mixes his spinal fluid with that of a real patient. As a result, it is diagnosed that Hugo is harmless and, because of his limitations, he is unsuitable for employment in Germany.

Not long after his release from the Ursula clinic, Hugo Wilmar visits his friend Jan Woldijk. Hugo Wilmar asks Jan if he can help him escape from occupied territory. Jan is a member of the resistance and publishes clandistine newspapers from Wassenaar. Jan Woldijk helps Hugo and Bob Hummeling on his way to Paris, where he has contacts. At the end of February 1944, the pair departed from The Hague Bezuidenhout. 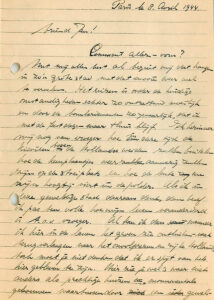 The first part of the long tour Hugo undertakes largely on foot. Arriving in the city of light, he informs the home front via a few cryptic letters, written under a pseudonym. Because of the news of the Allied invasion of Normandy, his stay in Paris did not last long. Hugo is in a hurry to continue his journey.

The reflection of a train compartment shows the German newspaper, which Hugo has put under his arm. Without a travel permit and reservation, Hugo succeeds in getting on the train to Pau in Gare de Lyon.

From Pau, the tour crosses the Pyrenees on foot. In his letters to The Hague he mentions the beauty of nature and the overwhelming views around Pic du Midi. This impresses Hugo more than the danger of the German patrols they encounter during the walk.

From the snowy peaks of the Pyrenees, Hugo and his companions finally arrive in the United Kingdom on a long, daunting journey through various concentration camps in Spain and North Africa. However, the fanfare on the Glasgow quay is not intended for the "Engelandvaarders" on board. Hugo is hastily transported on a special train to London for a thorough interrogation by MI5 and the Dutch police.

Nine months after his departure from The Hague, Hugo finally walked around in London as a free man, on December 1, 1944. The "Engelandvaarder" immediately reports to the RAF where, to his great frustration, he is rejected for all active front duties because he wears glasses. After some deliberation Hugo signs with the Dutch Marines. He will complete his training in America together with the first group of war volunteers.